What are the TOP 10 SPOTS IN LONDON FOR ENGAGEMENT SHOOTS?

Being London-based means I do a lot of wedding photography in the city. Something I always try and remind my couples is what a great place it also is to do an engagement shoot

From spectacular iconic buildings to moody back streets, edgy creative quarters and historic parks, there’s an unbelievable array of shoot locations just waiting to be used. It’s a no brainer if you live in London, but even if you’re just passing through it could be the best few hours you spend in the big smoke, since you can explore a bit and capture some fabulous relaxed shots before the big day.

Of course, there are more than ten fantastic locations – and you don’t need to limit yourself to just one – but these are my favourites. If one captures your imagination and feels like it could be perfect for your engagement shoot in London, just let me know! Here are my Top 10 Pre Wedding Shoot Locations in London.

If you’re not quite sure where you want to be for your London engagement shoot, but you know you want it to really feel like London, there’s no need to overthink it – just hit the streets. There’s so much variety and atmosphere that you can’t fail to find something interesting amongst the bustling visual tapestry of cars, pubs, people, gardens, iconic signage and eclectic architecture, and the River Thames.

Whether you want Victorian splendour or graffiti-covered realism, it’s all about embracing the unexpected and exploring little bit, until you find something that feels authentic to the two of you.

If you want a real central London feel, with sweeping backdrops and a bit of scale, Tower Bridge is a great spot to aim for. The bridge itself is one of the most famous and photogenic landmarks in the capital, but also offers an excellent vantage point to shoot the two of you with the contrasting glass and steel of the city behind you. There are lots of excellent complementary locations nearby (like the world-famous Shard building to name but one) so you can get a lot of variety in a relatively short space of time.

Arguably London’s most recognisable structures, Big Ben (or more accurately, the clock tower that holds the famous ‘bell’) and the Houses of Parliament are the ultimate symbols of British heritage.

The neo-gothic style looks fantastic on camera, but better still the spacious streets nearby offer all kinds of opportunities for your engagement shoot, with plenty of additional iconic spots in walking distance. You can get up close and personal or cross Westminster Bridge and shoot them from across the river. Using depth of field to soften the buildings can look really good whilst still leaving them instantly-recognisable.

Just along the river from Big Ben is the South Bank, a stretch of the Thames famous for its spectacular skyline and ultra-cool architectural details. Famous as the city’s original cultural district, it has a completely different feel to what was the far more affluent north bank, and if you want an artsy feel to your shots this is a natural first choice.

Engagement shoots on the South Bank are effortless since everything just looks great on camera, with the added bonus of the London Eye nearby. And if you want a bit more hustle and bustle in your shots there are plenty of atmospheric streets and squares just a stroll away.

One of the most popular spots in the West End is Covent Garden, a photographic favourite with locals, tourists and the soon-to-be-married alike.

The theme changes throughout the year, which ensures your shots will always be that little bit more different, and its world-famous reputation for stylish boutiques, eateries, pubs and cafés is well-earned. Which makes it fabulously photogenic, and great for refuelling after your shoot.

The Barbican Estate is a concrete wonder, filled with the kind of mid-late 20th Century minimalism that photographers adore (I’m no exception). It also makes for a more private shoot, thanks to quiet hideaways that crop up here and there, great if you don’t fancy being on display to the crowds whilst getting intimate with your partner.

It’s also one of London’s premiere artistic destinations, home to the Barbican Arts Centre, the Museum of London, and the Guildhall School of Music and Drama. So if you’re after something with a bit of an edge, this could be your dream come true.

Regents Park, Hyde Park, St James Park, Green Park, and Kensington Gardens provide a picturesque and quintessentially London spot for you to relax and settle into your shoot, with plenty of variety on offer depending on what you want from your shots. From busy bandstands to quiet grottos or open spaces, there’s plenty for us to explore.

And if you want a bit more spectacle, Buckingham Palace – official London residence of the British Royal Family – is just around the corner. It’s a bit more touristy but the iconic pillars are well worth the extra effort.

A short jaunt from the centre on the Northern Line, Camden Town has been one of London’s coolest spots to hang out for decades, and you won’t find anywhere better for quirky backdrops, quirkier people and a real buzz. Music lovers will feel especially at home, Camden has one of London’s most vibrant gig scenes, and that raw creative energy always seems to come through in photos I take in the area.

When you’re done shooting the streets I recommend heading up to Camden Lock for a slightly different vibe. The pubs, brick archways and old barges are effortlessly cool on camera. If you want an alternative look to your pre-wedding pics, this one’s for you.

There are lots of London locations that offer views of the city, but few are as picturesque as Primrose Hill. A grade II listed park, you can get all the lazy, leafy shots you want, with sensational views of the city sprawling away in the background, then either head into the city for something a bit bigger or edgier, or carry on your suburban stroll towards Swiss Cottage or Chalk farm where there’s more remarkable Victorian architecture than you could possibly shoot in a day. And it all looks just as good at night as it does in the day. 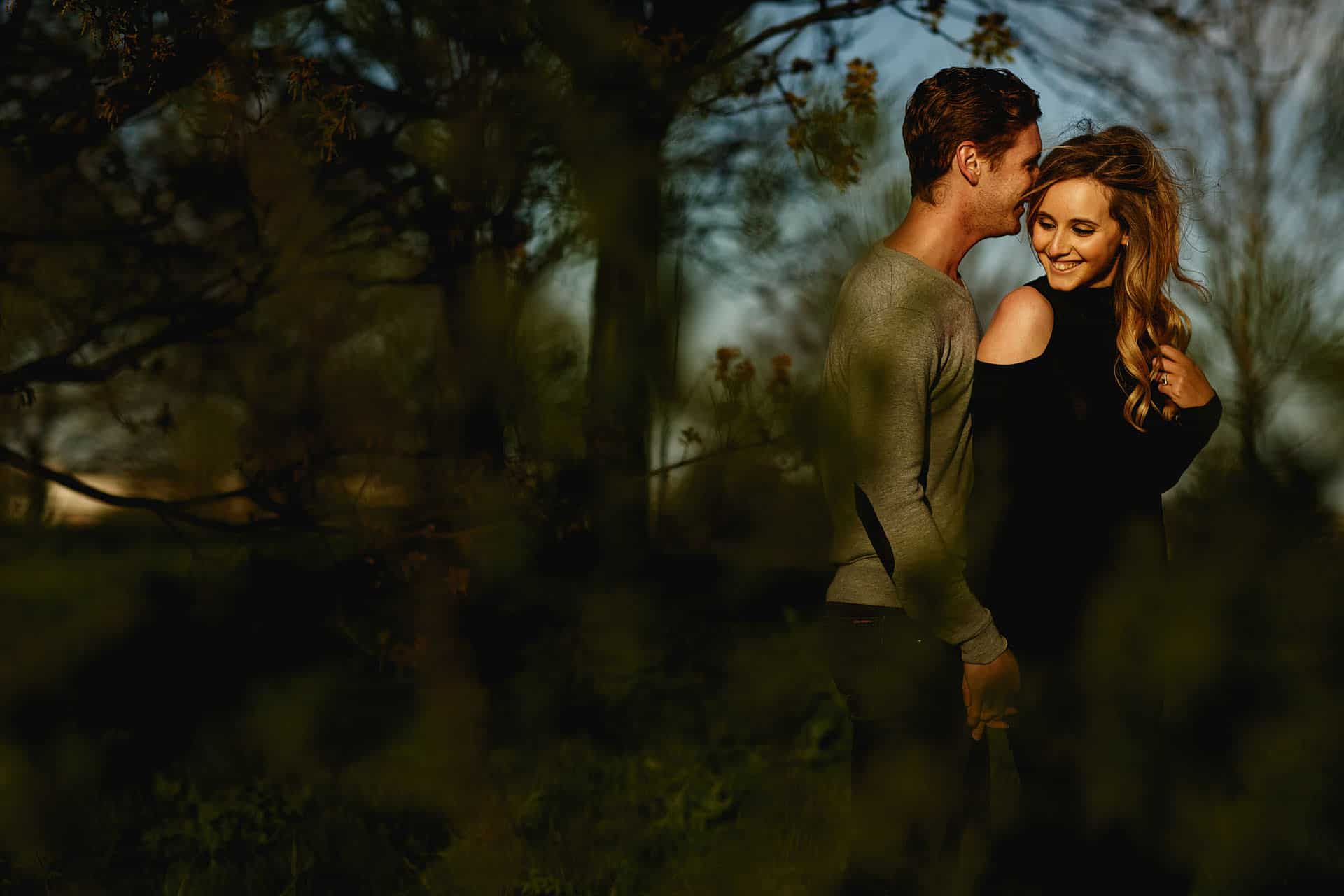 St Paul’s Cathedral is 1,400 years old, and the mother church of the Diocese of London. It’s spiritual, architectural and historic role cannot be overstated, and every year it draws hundreds of thousands of tourists to marvel at its splendid aura – many of them for engagement shoots.

Head to the nearby Millennium Bridge and you can get a quite different feel, with its stunning views of the Tate Modern and the Thames. Especially when the weather is good, these are undoubtedly two of the best places in London to start the story of your wedding photographs, and you may even bump into a proposal or two along the way.

Why Choose London for your pre-wedding shoot?

If you’re deciding on a city in Europe for your pre-wedding shoot, then London is definitely one of the best locations in Europe if not in the world. London is full of centuries-old landmarks, iconic locations and modern buildings which means you’ll have have a variety of backdrops for your pre-wedding shoot. The city is full of art, culture everywhere you look, there are so many hidden gems you can find just wandering the streets. So whether you decide to use Big Ben, Westminster Abbey, St Paul’s Cathedral, The Shard you’re guaranteed to have stunning images with these famous landmarks as your backdrop. London changes swiftly from the iconic to the bohemian in an instant, there are layers of history that can be uncovered around every corner and every street.

You and The City

The pre-wedding shoot is a great way for couples to get to know a photographer, get comfortable in front of the camera, as well as creating stunning photos of yourselves to hang on your wall or even use as save-the-date cards, invites, guestbooks, show off on Instagram and more!

The best way to approach your pre-wedding shoot is to think of it as you’re spending time together, just be yourselves this will give you the most authentic results from your pre-wedding shoot. Your relationship as a couple is unique, and during the pre-wedding shoot I want to create images that are unique to you. Whilst you guys are being yourselves, this will also allow me creative freedom around you, experiment with ideas and create glamorous, fun and honest images of you.

Every time I photograph a couple for their pre-wedding in London, I always let them know that this will feel slightly uncomfortable in the beginning, but thats only natural and as the session goes on you’ll start to relax and won’t even notice my cameras, and we’ll be having a lot of fun together too.

London is a super busy city, with millions of people bustling around everyday. Personally, I love to shoot at Sunrise, as the city is quiet and you can make it your personal playground, then when it becomes busier take a break and then carry on later in the day a couple of hours before sunset to take advantage of the golden light, and thereafter at night when London completely transforms with all the city lights.

28 of my favourite pre-wedding photographs in London

Things to do in London

If you’re travelling from abroad to London for your pre-wedding shoot, or from anywhere afar, there is so much to do in London. Along with your pre-wedding shoot in London, I highly recommend taking some time out to enjoy this wonderful city that I love so much and am lucky enough to call my home. I’m always willing to give recommendations for anything you want to do, just ask.

Apart from the historic buildings, architecture and iconic sights, there’s so plenty more that you can see, this is what makes London one of the world’s top destination cities in the world. People descend on London to see the diversity of cultures, the different cuisines, for night out in Soho or simply for some Afternoon Tea at Harrods.

One of the trendiest boroughs in London is Kensington & Chelsea, often referred to as the ‘Royal’ borough. The streets are lined with high-end designer shops, expensive homes and plenty of fine dining restaurants. In contrast to Kensington is Notting Hill with its quirky streets, pubs and plenty of antique stores. Whatever your interests from theatre to lazing in the Royal Parks, you’ll definitely find something for you in London.